The east coast IRC championships here in Annapolis was the perfect place to do a dual score with HPR. We had eight boats, 2 very good east coast TP’s, Interlodge and Flying Jenny 7 that was just donated to USMMA, Catapult a new Kerr 40, Stray Dog a B/C GP 42, OOAH a new Mc 38, Spookie a new Carkeek 40 and 2 Farr 400’s. I had the pleasure to sail on Team Premier, Farr 400 403. 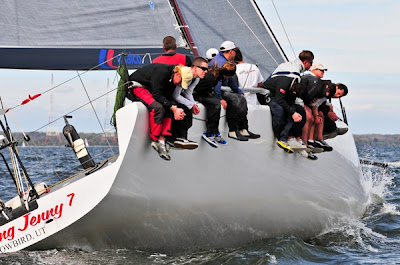 All photos by Dan Phelps/SpinSheet magazine

The racing was very good as all the boats were well sailed and in very good shape, with 6 out of the eight from 2011 or later. The first race was a light bay tour. First leg proved to be the most tactical. A port tact reaching start that tuned into a beat. First around was Interlodge, with Flying Jenny just behind. We had a very good start and sailed a good leg to be next, followed by the MC 38, GP 42 and Spookie. The next leg was follow the leader but that all changed on the third leg. 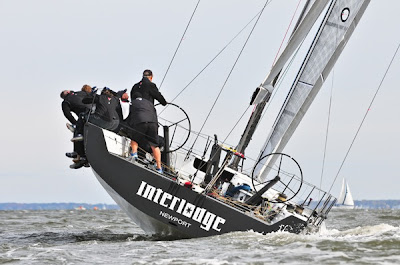 This leg was a run across the bay in 8 knots of wind. Problem was on the other side there was little wind and the rubber band contracted. Worse hit was Interlodge as they showed everyone the hole and a lot of us got around her. This was their undoing for the regatta in both rating system. FJ7 took off getting to the wind first and was never threaten. We rounded second and was able to hold on to the finish less Interlodge passing us 2 legs later. And that was basically it. 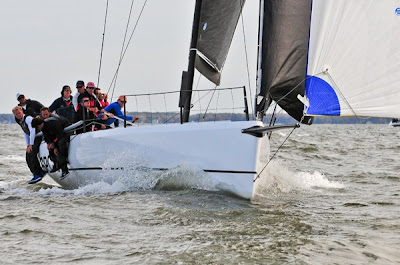 The next day with Sandy getting closer we had a perfect day of sailing in 13-17 knots of wind. The RC decided to get 4 races in and cancelled Sunday’s racing for good reason. The first 3 races was wind with tide that gave the big boats an advantage. The last race the tide turned and was more even. With all five races we saw a pattern with the caparisons of the boats. Most interesting was the 40 footers as there were 6 boats you can see a lot. 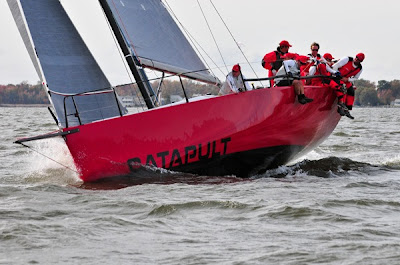 The Kerr 40 was a bit of an odd ball in the group as it was a real IRC optimized 40’. She rated the least of all the boats in IRC and finish mostly behind the other 40’s except the MC 38. But her IRC rating came in well and she ended up second to FJ7 for the IRC series. The HPR does not give the Kerr the go slow credits and she dropped to 7th . The Farr 400’s rated not so well in IRC but good in HPR as the lowest rated of them all. We went from 5th in IRC to 4th in HPR.

My take on the whole boat comparison is as follows. The TP’s still have an advantage in both rating systems. I believe this come from two areas. First there has been years of development in these boats by some of the best sailors/designers int he world. Second, there seems to be a dynamic advantage of this size of boats over the 40’s. They just go better upwind and downwind. Biggest advantage is in light air where they can do more apparent wind sailing.

In the 40’s, it is more interesting. Spooky is a high tech latest thing from Carkeek. She is a direct development form the TP’s and also designed to what was to be the HPR fast boat. She is definitely the fastest 40. She is also the most expensive by far. Carkeek has a more reasonable version coming out from PCT.  She did not fair as well in the light air and was slower than the Farr 400. 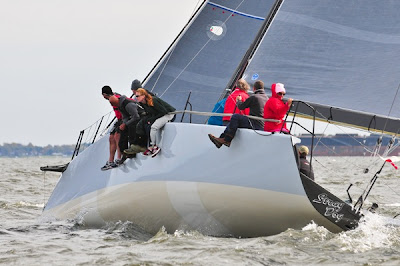 The next fastest boat is the GP 42, she is longer by 2 feet or more and very high tech build. She did well in both classes and would have done better if sailed the last race. The next fastest boats on the water are the Farr 400’s. And the fastest 40 in lighter air. They rate high in IRC but the lowest in HPR. We had two bad races and it showed but we deserved our finish on points of 4th in HPR and 5th in IRC. The 400 cost much less but is still built of carbon and epoxy resign. She has a very good mast and winch package and is easy to sail. The Farr 400 is a true one design boat, but we did one small mode for this race that help in HPR and hurt in IRC. That is we added a pole. 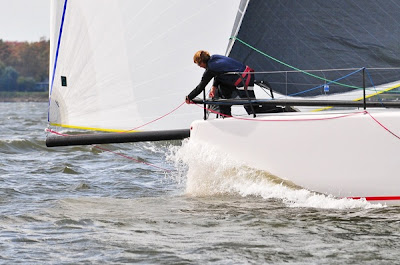 The pole was the same length as the sprit. We gybed, hoisted and dropped off the sprit but sailed with the pole. It was very fast in the first light air race when we can sail 8-10 degrees lower than the other boats with sprits at the same speed. In the windward leeward races it took quite a while to figure out what angles to sail, we figured the last race we got it right and it seem to me that we were faster by 25 sec a mile compared to our sister that sailed without the pole. The pole cost 7 ticks in IRC and nothing in HPR, go figure. 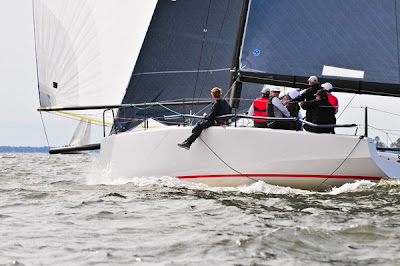 Next fastest on the water was the Kerr 40. They were very fast upwind in breeze, almost as fast as the Spookie and the GP but quite a bit slower downwind against everyone. We came back from a couple of very bad situation to pass her down wind. Once at the finish line. Also, she was the slowest boat by a lot in the light air first race. If it was a light air regatta, then she would not have placed as well. But you have to give her credit as she was second in IRC, all the go slow credits work in IRC.

The slowest boat on the water was the MC 38. Her best race on the water was the lighter first bay tour. But in the moderate winds of the up and downs she was not so fast. The in the 4th race she had her jib halyard break and was un able to finish the last 2 races. The 38 is the least expensive boat. 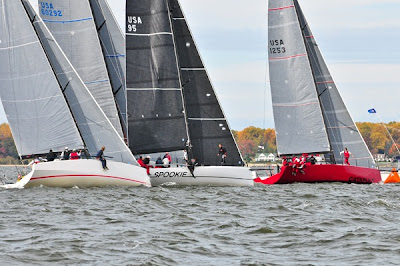 Good action at a start

I like the HPR better than the IRC as it promotes fast boats that are fun to sail. The corrected times were much closer in this first try. So I would expect the racing to be closer next year. On the water we all had fun on the faster boats. It is nice to sail fast in the light and the breeze. Something you can say the IRC does not promote in the 40 foot size boats. The IRC could rate these faster boat fairer but they choose not to. The IRC gives too much credit for going slow in this size range and therefore a designer has a choice. Yes, Spookie did do ok in the IRC results. They were the best sailed 40’.


Results can be found at:


Posted by Dee Smith Yacht Racing at 6:12 AM

links to check out